"Slapstick violence and dark comedy are tools that Ceide uses to draw us into the story on a surface level but once there we become invested in the deeper subjects she is tackling. Salamanca Blues is a tale that doesn’t just mirror the ecological concerns we are living through in 2022 but also touches on ideas of religious intolerance and bigotry". Andy Oliver, Editor-in-Chief at Broken Forntier. Read the whole review here
Salamanca, once a gorgeous Spanish city, is now a decadent field of ruins buried in the desert. The intense heat and new predators have defeated human dominance of Earth, and mankind is on the brink.

Salamanca Blues is my first graphic novel. It is divided in two parts and it belongs to The Earth Blues Series, a collection of theme-related stories that I'm creating to build a memoir of the future of mankind on Earth. My series is influenced by climate change's terrible prospects, and I conceive with fantasy and humour the decadent outcomes of our society. 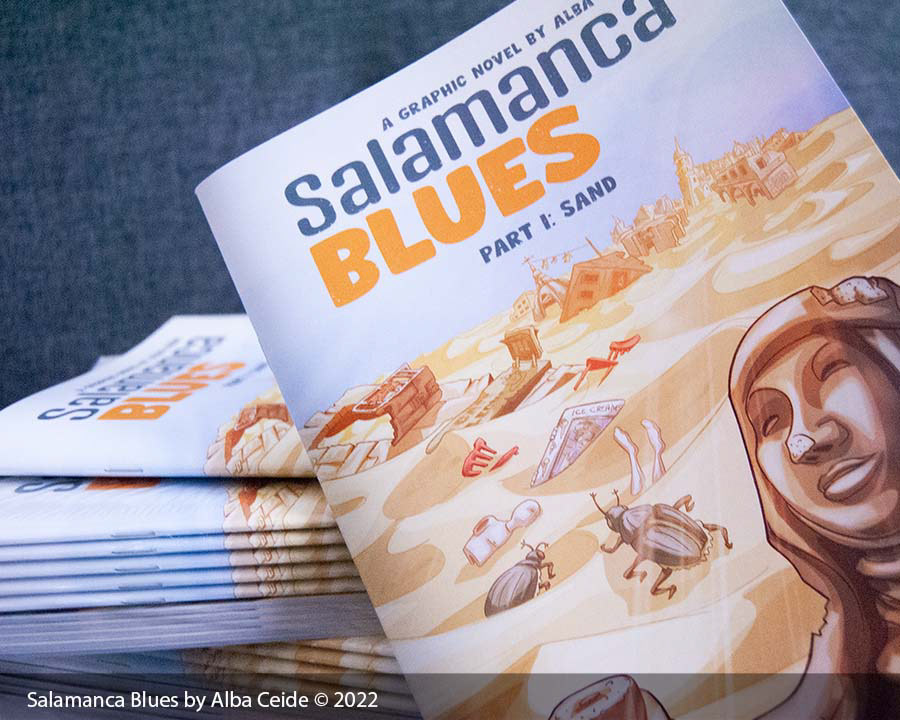 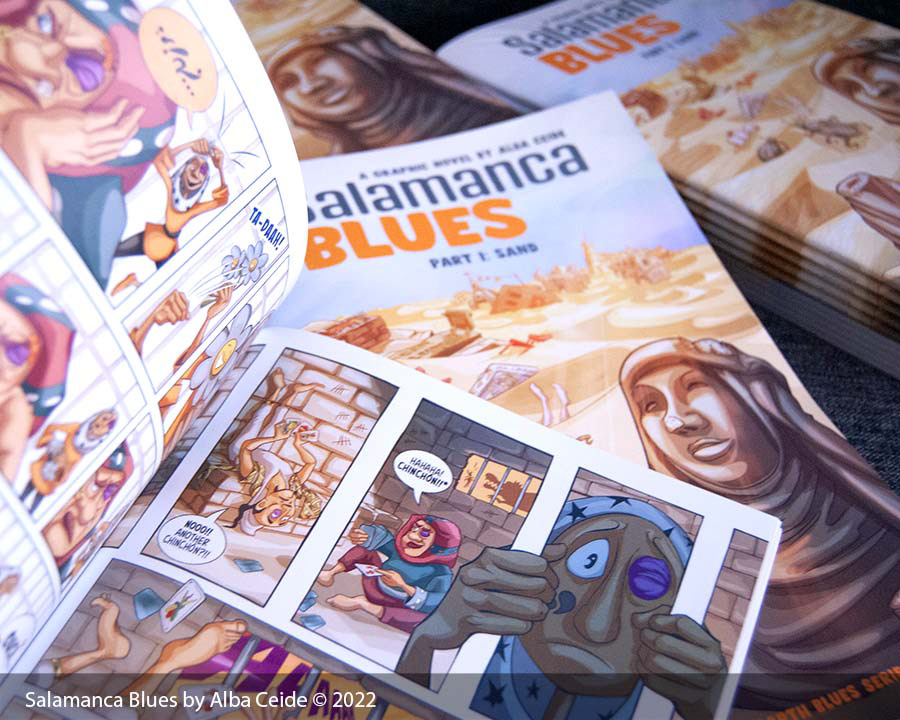 Salamanca Blues is a 48 pages full colour comic printed on 130gsm silk paper, available in English and Spanish. I published it via crowdfundin and now it's available in selected shops and libraries in London, A coruna and Salamanca (see list here).
In Salamanca Blues I imagine how life could be in Spain once most of its land has become a desert. The story of the first part, Sand, starts in the ruins of Salamanca where a religious order controls the population with fear and superstition. But that is only the beginning...

The population of Salamanca's ruins is controled by a crazy religious order and they are forced to worship a huge lizard.

There're whimsical characters such us Mimo, a foreigner who speaks in an unknown language and does magic, The Hunter, an independent woman with strong morals who finds it difficult to keep quiet when faced with an injustice; and an ex-priest, a curious man who questions the dogmas of his religious order and who loves studying the ancient culture of the extinct civilization that ruled the Earth. These are three main characters who are forced to flee Salamanca’s ruins and cross the dangerous desert to escape from Captain Álvarez, his guards, and the priests behind them, the authorities who control Salamanca’s ruins and the people living in them.

Salamanca Blues is a journey that starts in Salamanca, and at the end of Part 1 the characters travel up north, towards Galicia (my homeland), following one of the old routes of the Camino de Santiago (St Jame's Way). Even if I was writing a fictional story, I wanted to be true to the real city of Salamanca and preserve part of its historical buildings, see the images below to see some of the landmarks featured in my comic. 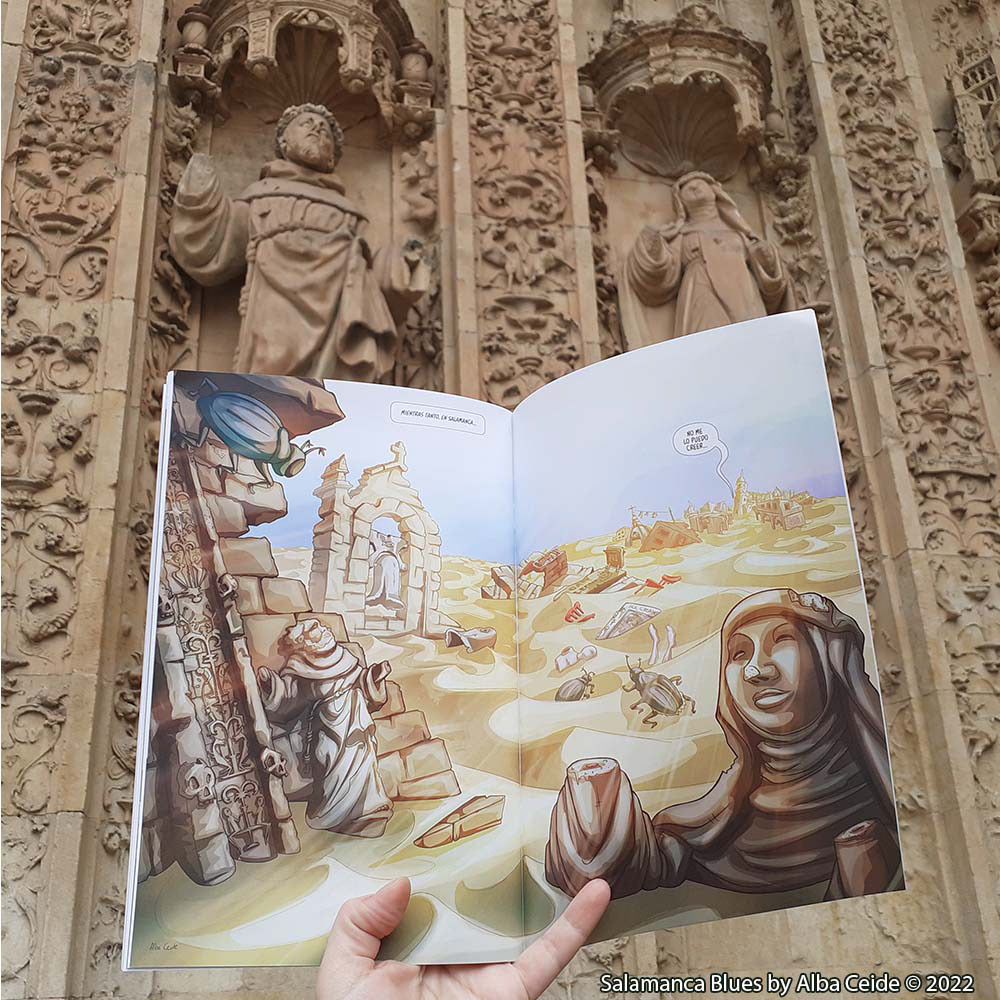 I took inspiration by the scultures of San Esteban Monastery 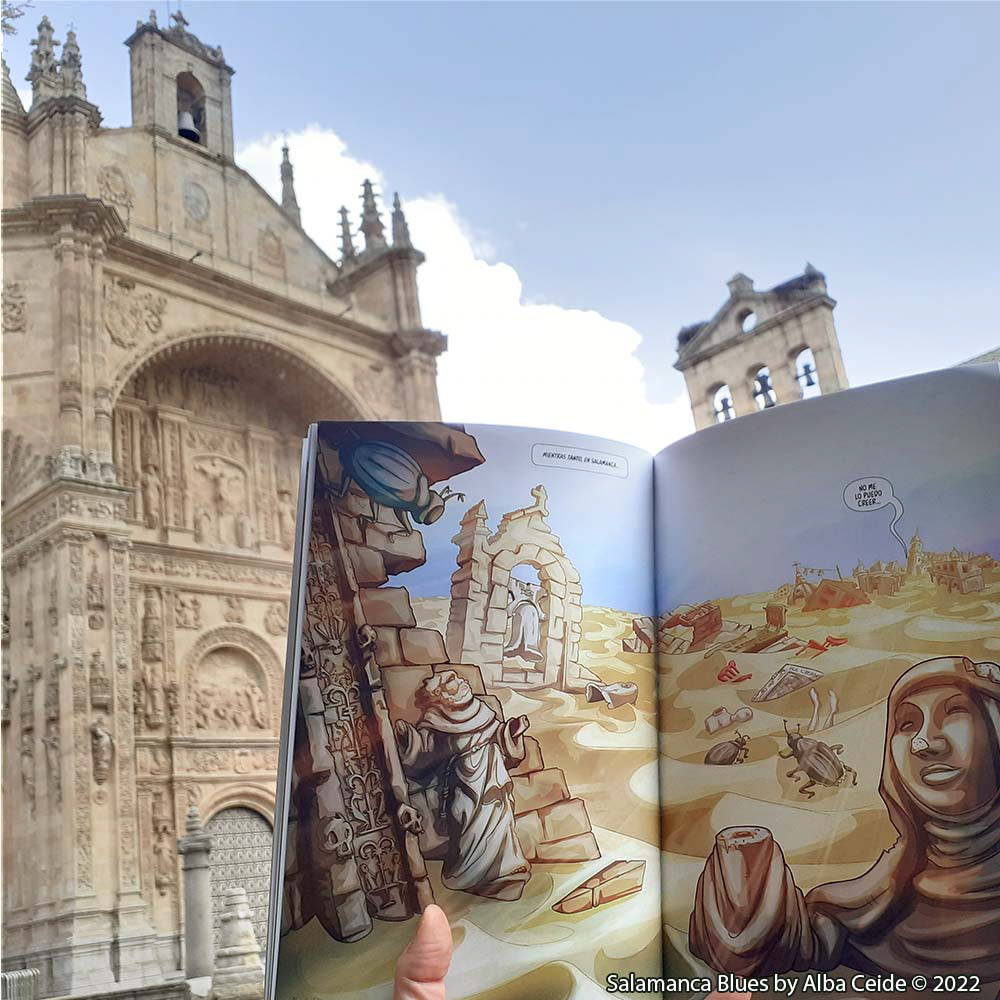 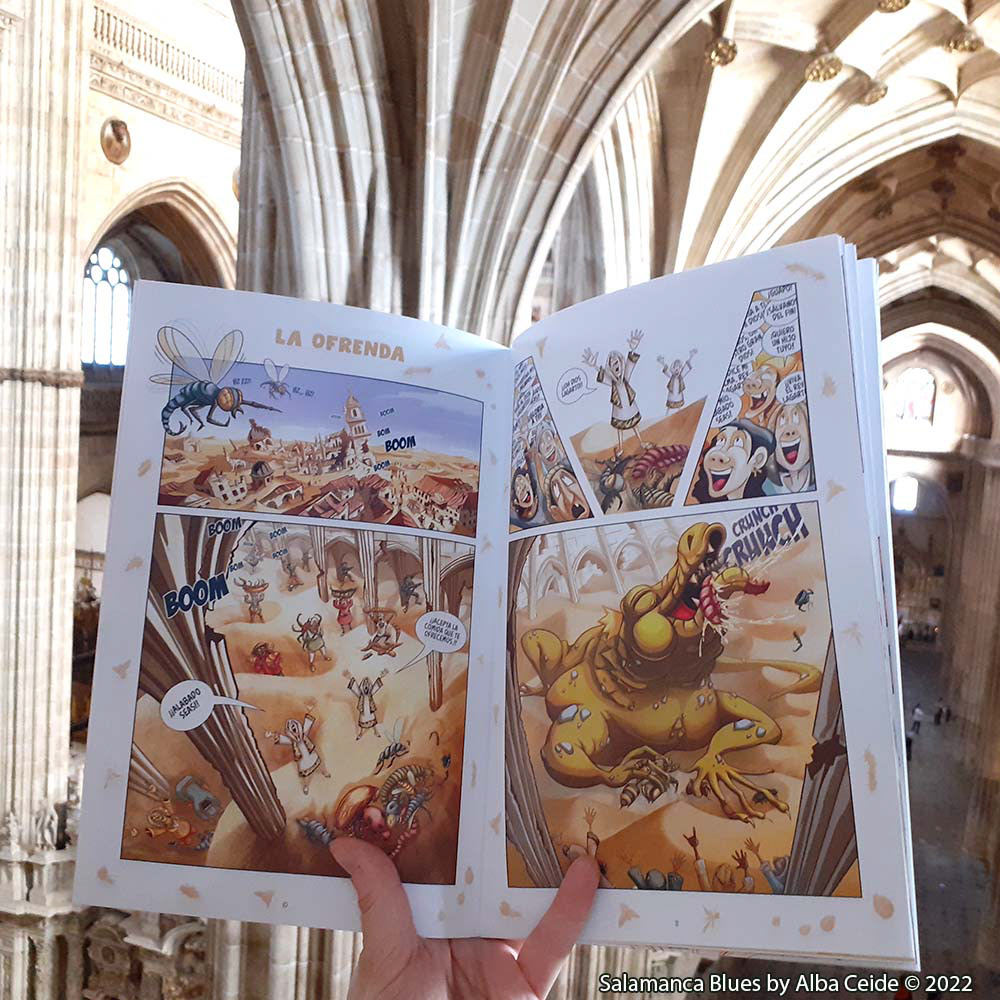 This is the inside of the Cahedral featured in my comic 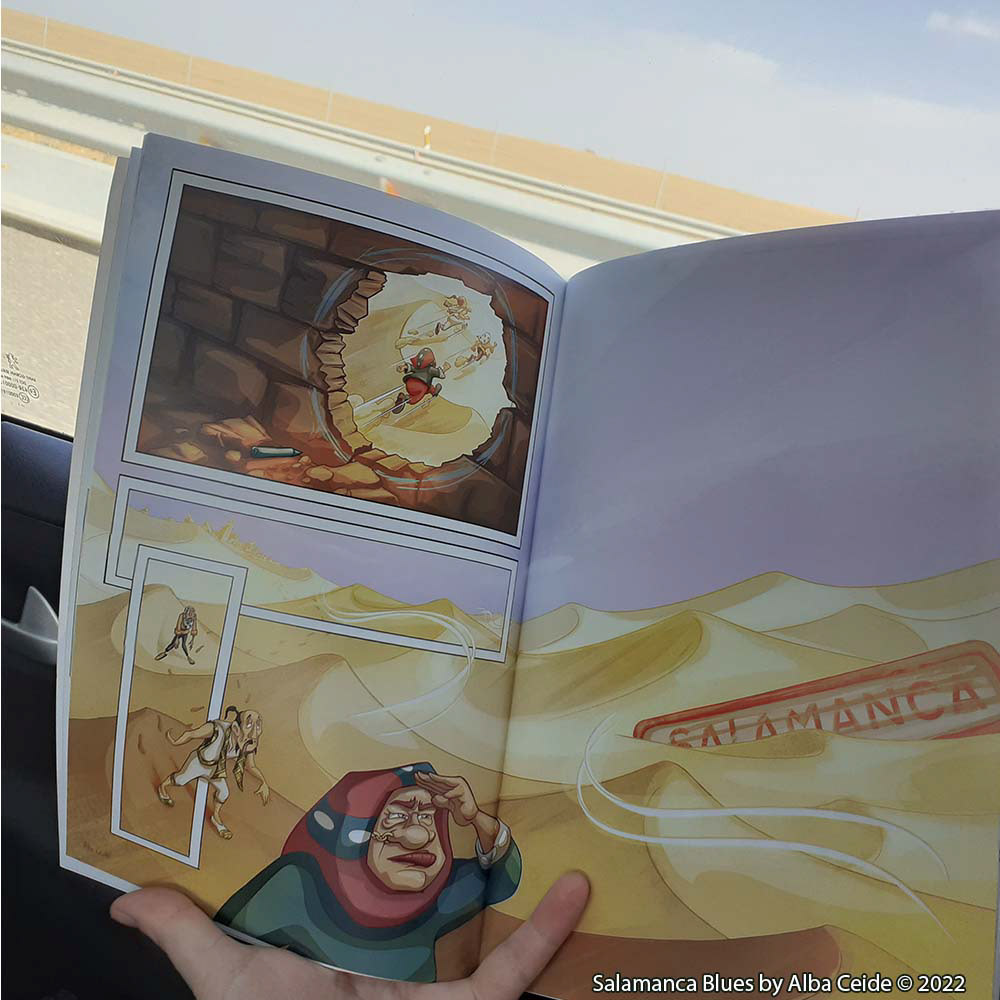 The dry steppe of Central Spain and the current desertification and ecological issues inspired me to create a desert. 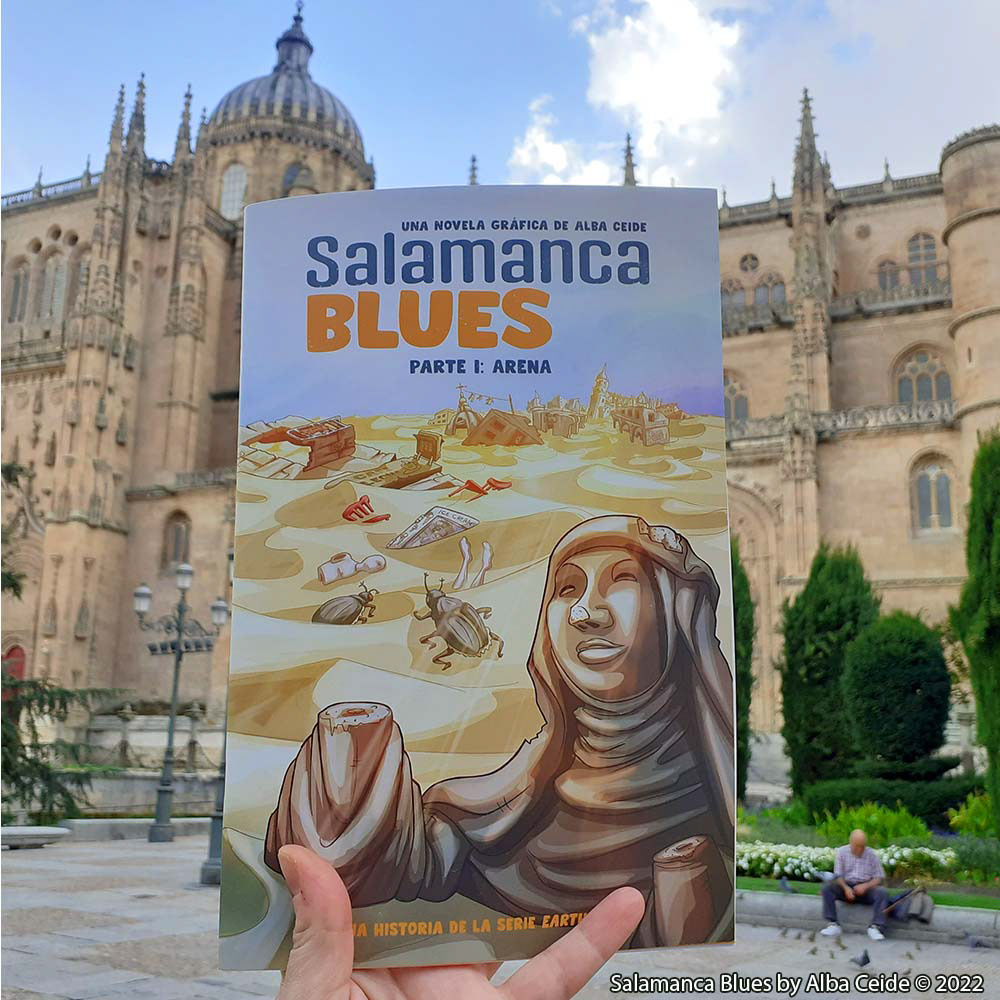 The cathedral is one of the main landmarks that appear in my comic. 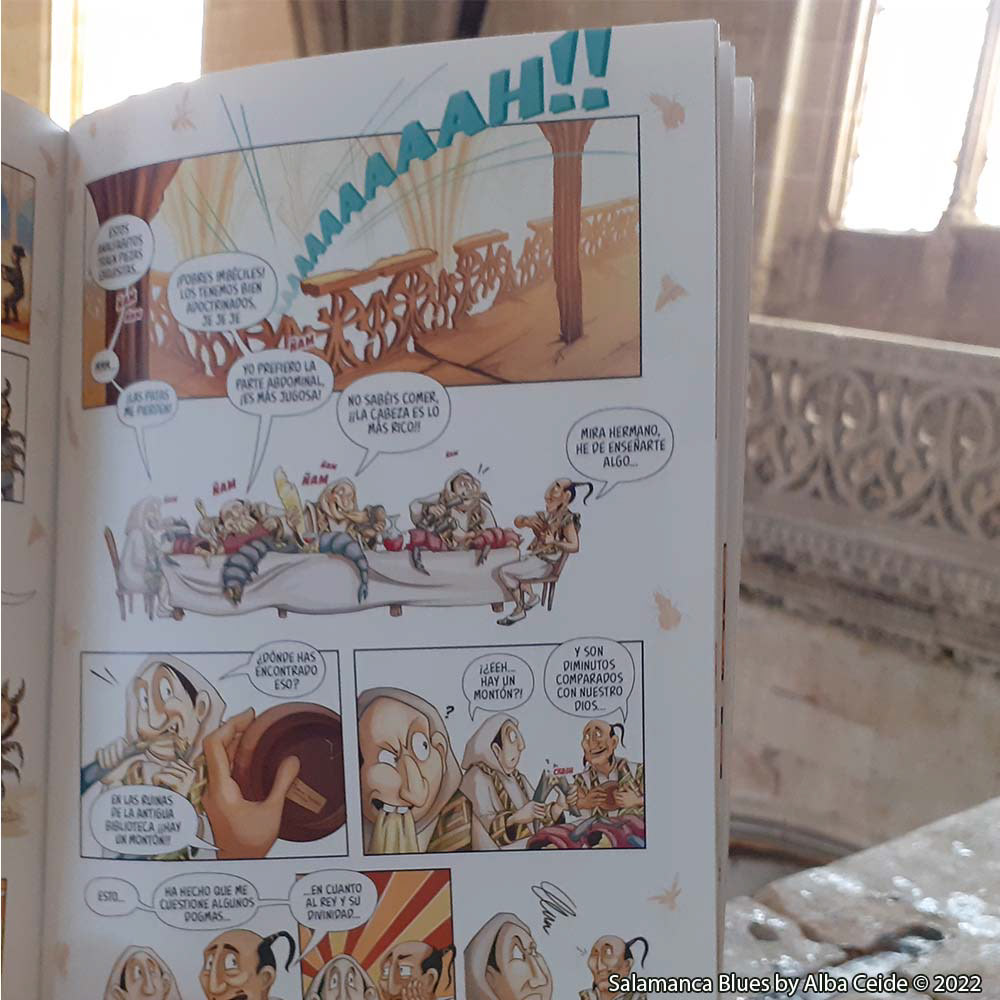 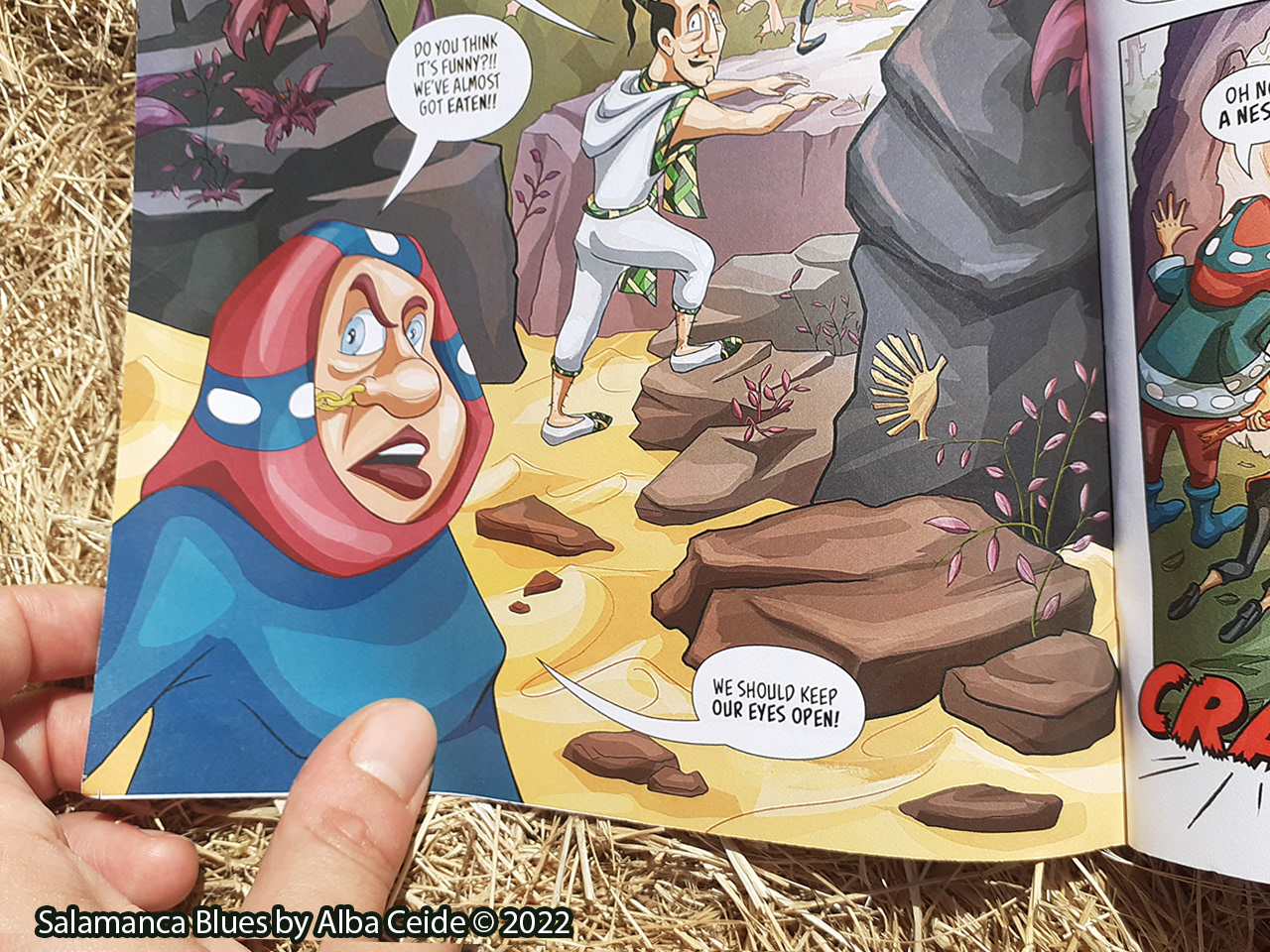 The scallop shell on the rocks, symbol of St James' Way 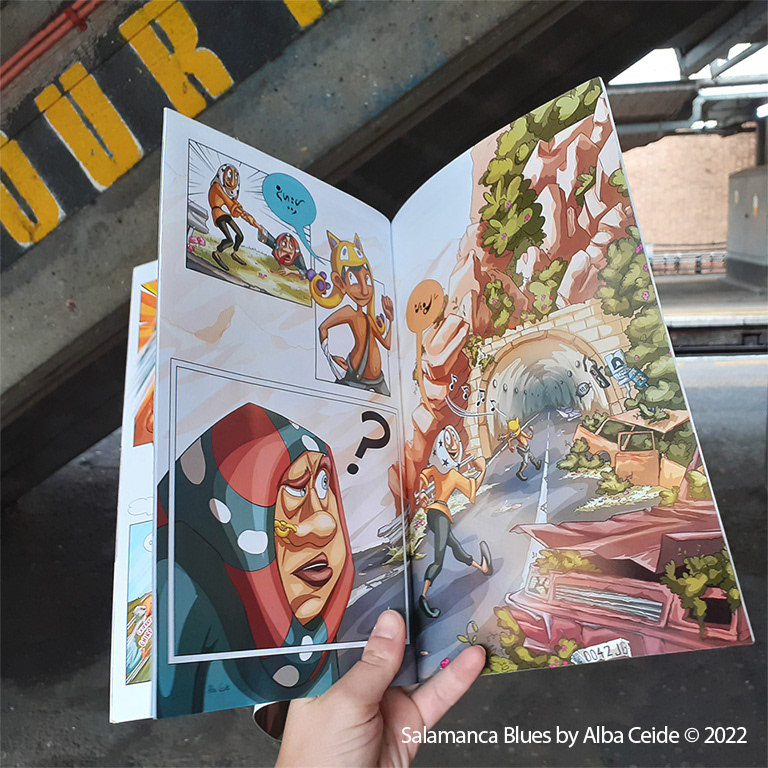 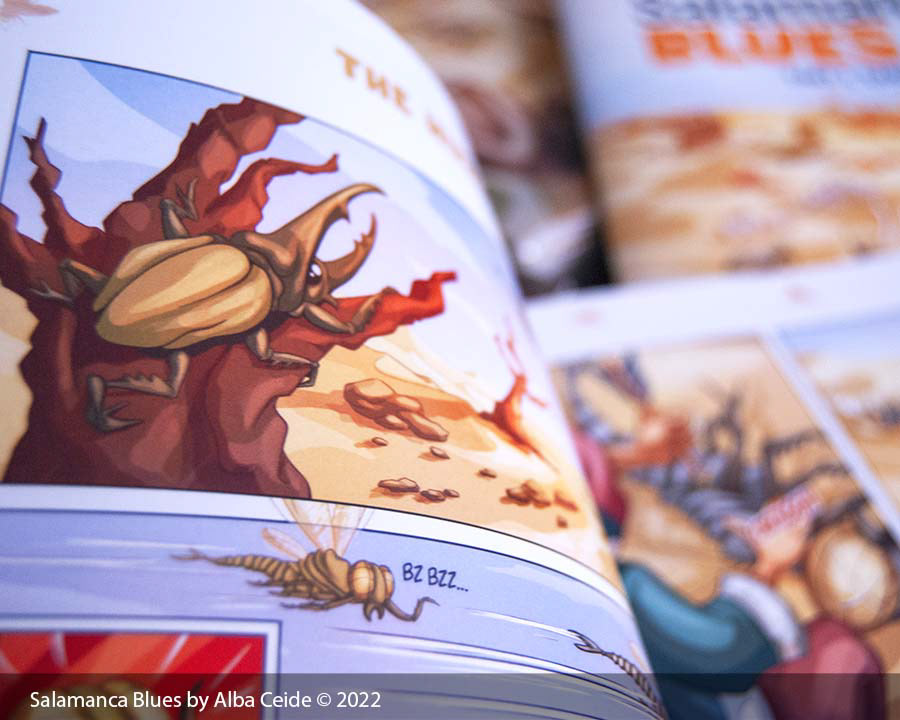 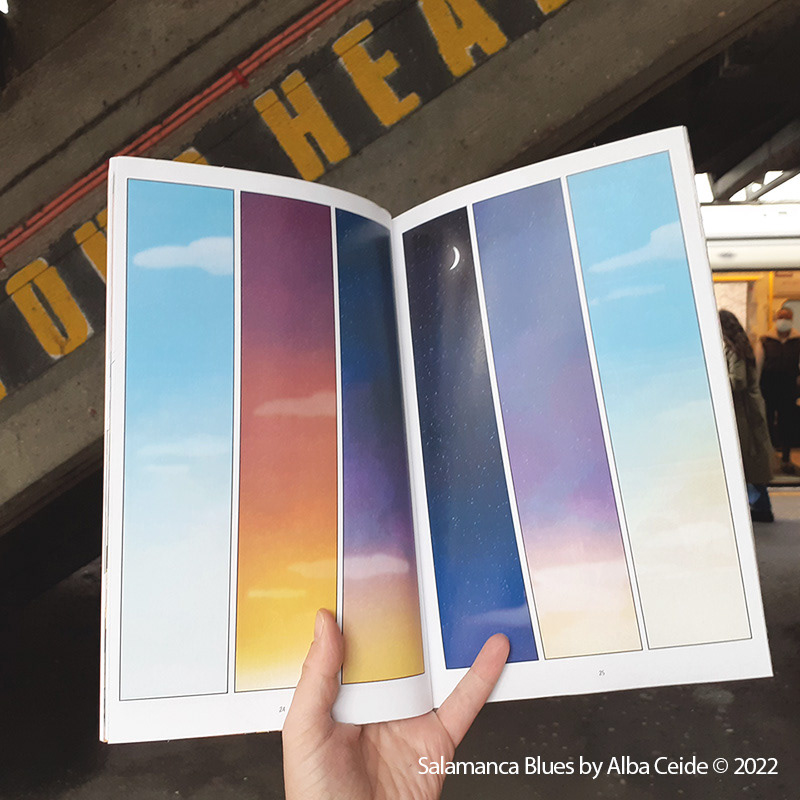 The Crowdfunding and selling points now
I published my comic with a crowdfunding on Indiegogo, a huge thanks to all the backers that supported me! In the photo below you can see the envelopes that I posted to my backers: full of comcis and perks such as Fine Art Prints, Stickers and a complementary Riso Print :)
Now you can find my comic in a number of shops in London, A Coruña and Salamanca, see the list here